The answer is that love is ‘unconditional selflessness’, and that unconditional selflessness is the underlying theme of all existence, BUT that is a truth we couldn’t safely admit until we could explain the HUMAN CONDITION — explain WHY our human behaviour has often been so competitive, selfish and aggressive, so seemingly unloving. It follows then that the real issue behind the question of ‘what is love’ has been the issue of the human condition.

MOST WONDERFULLY, however, biology is now finally able to provide the dreamed-of reconciling, redeeming and thus psychologically rehabilitating, human-race-transforming explanation of our seemingly-unloving human condition, thus allowing us to safely admit that love is unconditional selflessness, and that unconditional selflessness is the underlying theme of all existence. (The video in which I explain the human condition is provided on the WTM page.)

To begin then this real explanation of love: the world’s greatest physicists, Stephen Hawking and Albert Einstein, have said, respectively, that ‘The overwhelming impression is of order…​[in] the universe’ (‘The Time of His Life’, Gregory Benford, Sydney Morning Herald, 28 Apr. 2002), and that ‘behind everything is an order’ (Einstein Revealed, PBS, 1997).

Yes, this ‘order’ IS apparent everywhere. Over the eons a chaotic universe organised itself into stars, planets and galaxies. Here on Earth, atoms became ordered or integrated to form molecules → which in turn integrated to form compounds → virus-like organisms → single-celled organisms → multicellular organisms → and then societies of multicellular organisms. Overall, matter is becoming ordered into larger wholes. So the direction or theme or purpose or meaning of existence is the ordering or integration or complexification of matter, a process that is driven by the physical law of Negative Entropy. (The law of Negative Entropy states that in an open system, where energy can come into the system from outside it — in Earth’s case, from the sun, and, in the case of the universe, from the original ‘big bang’ explosion that created it — matter integrates; it develops order. Thus, subject to the influence of Negative Entropy, the 94 elements from which our world is built develop ever larger and more stable wholes.) ‘Holism’, which the dictionary defines as ‘the tendency in nature to form wholes’ (Concise Oxford Dictionary, 5th edn, 1964), and ‘teleology’, which is defined as ‘the belief that purpose and design are a part of nature’ (Macquarie Dictionary, 3rd edn, 1998), are both terms that recognise this integrative ‘tendency’. 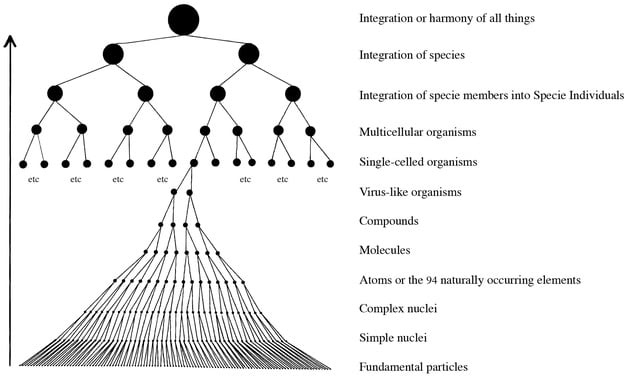 Chart showing the ordered integration of matter on Earth

A vital part of this integrative ordering of matter is selflessness because for a larger whole to form and hold together the parts of that whole must consider the welfare of the whole above their own welfare — put simply, selfishness is divisive or disintegrative while selflessness is integrative. So consider-others-above-yourself, altruistic, UNCONDITIONAL SELFLESSNESS is the underlying theme of existence. It’s the glue that holds the world together, and it is, in fact, what we mean by the term ‘love’. Indeed, if we consider religious terminology, the old Christian word for love was ‘caritas’, which means charity or giving or selflessness; see Col. 3:14, 1 Cor. 13:1–13, 10:24, and John 15:13. Of these biblical references, Colossians 3:14 perfectly summarises the integrative significance of love: ‘And over all these virtues put on love, which binds them all together in perfect unity.’ In John 15:13 we also see that Christ emphasised the unconditionally selfless significance of the word ‘love’ when he said, ‘Greater love has no-one than this, that one lay down his life for his friends.’

The great problem, however, with acknowledging and accepting this answer to ‘what is love?’ is that it left humans feeling unbearably condemned as bad, evil or unworthy for being divisive competitive, selfish and aggressive—in fact, for being so ruthlessly competitive, selfish and brutal that human life has become all but unbearable and we have nearly destroyed our own planet! Far from being loving and lovable, we seemed to have been unloving and unlovable, which is why we had to explain WHY humans have not been ideally behaved — explain the human condition no less, which fortunately we now can — before it would be psychologically safe to confront, admit and accept that the answer to ‘what is the meaning of love’ is that it is to be integrative and unconditionally selfless. In fact, the concept of ‘God’ is actually our personification of the truth of the integrative, selfless, loving meaning of life, and if we include more of what Hawking and Einstein said we can see that they both agree. Hawking: ‘The overwhelming impression is of order. The more we discover about the universe, the more we find that it is governed by rational laws. If one liked, one could say that this order was the work of God. Einstein thought so…We could call order by the name of God’ (‘The Time of His Life’, Gregory Benford, Sydney Morning Herald, 28 Apr. 2002; see www.wtmsources.com/170); and, ‘I would use the term God as the embodiment of the laws of physics’ (Master of the Universe, BBC, 1989). Einstein: ‘over time, I have come to realise that behind everything is an order that we glimpse only indirectly [because it’s unbearably confronting/condemning!]. This is religiousness. In this sense, I am a religious man’ (Einstein Revealed, PBS, 1997). Einstein was also recognising that God is order or harmony when he said, ‘In view of such harmony in the cosmos which I, with my limited human mind, am able to recognize, there are yet people who say there is no God’ (Hubertus zu Löwenstein, Towards the Further Shore, 1968, p.156). I might mention that while Mahatma Gandhi was an inspired leader of the Indian nation rather than a scientist, he was another who bravely acknowledged that ‘There is an orderliness in the Universe, there is an unalterable law governing everything and every being that exists or lives…That law then which governs all life is God’ (Louis Fischer, Gandhi: His Life and Message for the World, 1954, p.108 of 224). So, on a more profound level, as it says in the Bible, ‘God is love’ (1 John 4:8, 16).

Again, the problem was that until we could explain the human condition we couldn’t afford to demystify ‘God’ as Integrative Meaning and admit that love is unconditional selflessness. It is little wonder then that we humans have been, as we say, ‘God-fearing’ — in fact, God-revering to the point of being God-worshipping — not God-confronting! Not surprisingly, mechanistic science has also had to comply with this avoidance of the question of ‘what is love’, so much so that it has not been able to offer an interpretation of ‘love’ despite it being one of humanity’s most used, valued and meaningful words! The linguist Robin Allott gave this succinct summary of the excuses that have traditionally been used by the scientific establishment to avoid the question of ‘what is love’: ‘Love has been described as a taboo subject, not serious, not appropriate for scientific study’ (‘Evolutionary Aspects of Love and Empathy’, Journal of Social and Evolutionary Systems, 1992, Vol.15, No.4, pp.353-370). Indeed, the evasion has been of such a scale that ‘more than 100,000 scientific studies have been published on depression and schizophrenia (the negative aspects of human nature), but no more than a dozen good studies have been published on unselfish love’ (Science & Theology News, Feb. 2004).

Yes, the concept of ‘unselfish love’ took us far too close to the truth that love is the integrative, unconditionally selfless, ‘Godly’ theme or meaning of existence! We had to first explain our less-than-ideally-behaved human condition before we could confront it. So while there has certainly been much talk of the need to love each other and to love the environment, the REAL need and cause on Earth has been to find the means to love the dark side of ourselves, to bring understanding to that aspect of our make-up. The famous psychoanalyst Carl Jung was forever saying that ‘wholeness for humans depends on the ability to own their own shadow’ because he recognised that only finding understanding of our dark, unloving side could end our underlying insecurity about our fundamental goodness and worth as humans and, in so doing, make us ‘whole’. The pre-eminent philosopher Sir Laurens van der Post was making the same point when he said, ‘True love is love of the difficult and unlovable’ (Journey Into Russia, 1964, p.145) and that ‘Only by understanding how we were all a part of the same contemporary pattern [of wars, cruelty, greed and indifference] could we defeat those dark forces with a true understanding of their nature and origin’ (Jung and the Story of Our Time, 1976, p.24). True compassion was ultimately the only means by which peace and love could come to our planet, but it could only be achieved through understanding. Drawing again from the writings of van der Post: ‘Compassion leaves an indelible blueprint of the recognition that life so sorely needs between one individual and another; one nation and another; one culture and another. It is also valid for the road which our spirit should be building now for crossing the historical abyss that still separates us from a truly contemporary vision of life, and the increase of life and meaning that awaits us in the future’ (ibid. p.29). Yes, only ‘true understanding of the nature and origin’ of our species’ ‘good-and-evil’-afflicted, even ‘fallen’ or corrupted condition could allow us to cross ‘the historical abyss’ that ‘separate[d] us’ from a ‘compassion[ate]’, reconciled, ameliorated, ‘meaning[ful]’ view of ourselves. One day there had to be, to quote The Rolling Stones, ‘sympathy for the devil’ — one day, we had to find ‘true understanding’ of the ‘nature and origin’ of the ‘dark forces’ in human nature. Indeed, the great hope, faith, trust and in fact belief of the human race has been that redeeming, rehabilitating and thus transforming explanation of the human condition would one day be found — which, most relievingly, it now finally has been! Yes, the ‘future’ that Jung and van der Post looked forward to, of finding understanding of our human condition, is finally here!

Regarding other aspects of love, specifically romantic love — the dream of living in an unconditionally loving, fully integrated state with another person (as we say, we ‘fall in love’, we abandon ourselves to the dream of a human-condition-free, ideal relationship) — read the explanation provided in Freedom Essay 27.)

Drawn from ‘What is Love?’ in The Book Of Real Answers to Everything! and Freedom Essay 23: The integrative meaning of existence and its personification as ‘God’, by Jeremy Griffith